Echolocating bats are nocturnal mammals that produce very high frequency acoustic signals and listen to echoes from objects in their surroundings (Griffin, 1958; Neuweiler, 1989). There are over 1200 species of echolocating bats, and their echolocation signals and behaviors reflect their diversity in habitat and diet. Many bats eat insects, but some feed on fruit, nectar, blood or even small vertebrates.

Consider an echolocating bat hunting insects in the night sky. Light levels are low, and the bat need not rely at all on its vision.  Obstacles are present, but the bat dodges even branches and telephone wires with ease. As the animal flies, it produces sounds that are in the ultrasonic range, from 20 kHz, the upper frequency limit of the human ear, to 200 kHz in some species. These high-frequency signals are well suited to return echoes from small objects, such as insects, because the wavelengths of the signals are short with respect to the reflecting surfaces.

During each attack on an insect, the bat relies on changing echo features to guide its flight. Imagine that an insect is located off to the right of the bat when first detected. The bat computes the horizontal and vertical position of the insect from differences in the arrival time, intensity, and spectrum of echoes at the two ears. Also essential to the bat’s successful pursuit of prey is the estimation of target distance. The bat determines target distance from the time delay between its sonar signals and the returning echoes. After locating the prey item, the bat aims its head at the insect, continues to produce sonar vocalizations, receives new acoustic snapshots of the target, and re-directs its flight path to intercept the insect.

Echolocation signals. The types of acoustic signals used by different bat species vary greatly, but most contain frequency modulated (FM) components, whose frequency varies over the duration of the signal. FM signals are well suited to carry information about the 3-D position of objects, because each frequency in the signal activates different populations of frequency-tuned neurons whose responses can collectively mark echo arrival time at the bat’s ears. The big brown bat, Eptesicus fuscus, for example, produces FM vocalizations to hunt for insect prey on the wing. Constant frequency (CF) components are sometimes combined with FM components, and these tonal sounds are well suited to carry information about target movement through Doppler shifts in the returning echoes.  A Doppler shift is an apparent change in sound frequency that is proportional to the relative velocity of the source (in this case the sonar target) relative to the listener (in this case the bat).  If the bat approaches the target, the apparent echo frequency increases, noted as a positive Doppler shift. There is evidence that bat species using both FM and CF signals show individual variation in signal structure that may facilitate identification of self-produced echoes. One echolocating bat species, Rosettus aegyptiacus, produces sonar clicks with the tongue. 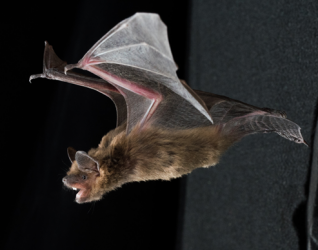 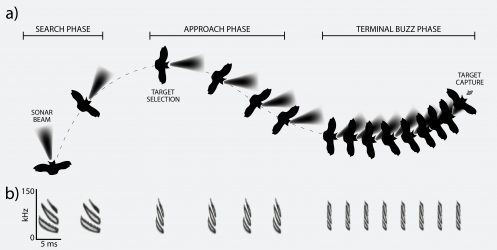 Schematic of echolocation calls produced by a bat in pursuit of insect prey. Courtesy of Melville Wohlgemuth.