Information about the environment can be conveyed to us in many ways, with sound being one of them. For many groups of animals – from invertebrates to mammals, both on land and under water – the perception of sound is an important sensory modality (Dooling et al., 2000; Fay and Popper, 1994, 1999; Hedwig, 2014; Popper and Fay, 1995). Sound can be perceived in different ways. Many animals have internal (inner) ears and can detect either the sound pressure or the particle motion (vibration) associated with the sound.

The hearing sensitivity of an animal is described in terms of its ability to detect sounds (Yost, 2013). The sound level (or vibration) that is just audible to an animal is called the hearing threshold and it is important to know if the threshold was measured under quiet conditions or in the presence of other sounds because ‘masking noise’ can raise hearing thresholds. The hearing sensitivity is conventionally expressed in Decibel (dB) relative to a standard pressure or in meters per second if describing sensitivity for vibration. If plotted as a function of frequency, the sensitivity can be graphically described in an audiogram.

Testing an animal’s sensitivity to sound can be done by training the animal to behaviourally respond to the perception of a sound (see Reichmuth et al., 2013 for example). By varying the level and frequency of the sound, the threshold can be determined very precisely. Alternatively, such tests can be conducted using an electrophysiological method, the measurement of auditory evoked potentials (AEPs) (Burkard et al., 2007). This technique is based on the fact that every time a sound is perceived, the mechanical energy of the sound wave is transformed in the inner ear into a neuronal signal which is transmitted as a nerve impulse to the brain. It is possible to measure these impulses at (or just under) the surface of an animal’s skin. While behavioural measurements provide better results with regard to absolute hearing sensitivity, they are very time consuming and require the animal’s cooperation. AEP measurements can be conducted much faster and do not require training, but provide only estimates of the hearing sensitivity, thus being ideal for comparative studies between several animals or species (Sisneros et al., 2016). 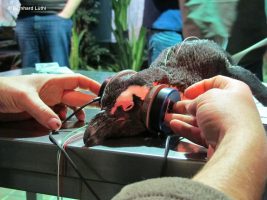 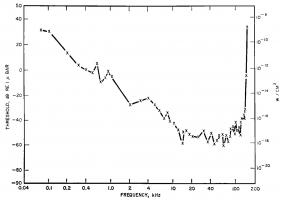 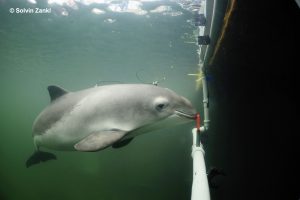